Karl Abraham. The Birth of the Object Relations Theory. 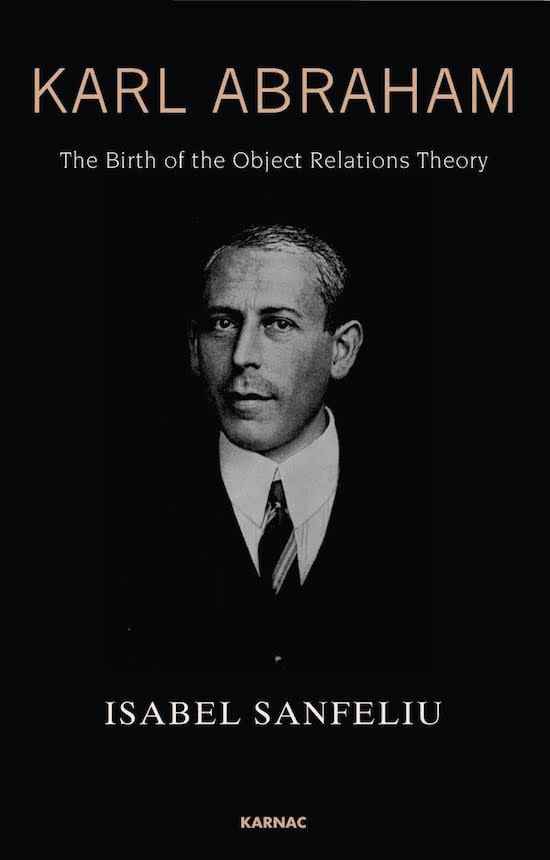 Together with Ferenczi, Karl Abraham was perhaps Freud’s most creative and devoted disciple. In this book, after outlining the socio-cultural context of the day, Isabel Sanfeliu examines Abraham’s life as a student, his family environment and his first steps as a physician and psychoanalyst.

As a clinical doctor Abraham was calm and detached, and a good example of a stable and objective analyst. Despite his strong personality, his loyalty towards Freud never wavered. At the pioneering Psychoanalytic Institute which he founded and directed in Berlin, he established a series of professional standards which are still observed today. The present book is organised around an examination of Abraham's psychoanalytic work, according to his different fields of interest, before going on to consider his rigorously conducted clinical research.

Abrahams's findings regarding the positive role of aggression in the development of the baby constitutes one of his original theories, as does the establishment of boundaries with the onset of object love. Abraham was undoubtedly influenced by his experiences with psychotic and highly dysfunctional patients. Not only did he observe the discharge function of the mother, but also her structuring dimension. It is in this sense that Abraham can be regarded as the pioneer of object relations theory, much before this psychoanalytic concept was given its name.

Notes about the author(s):
Isabel Sanfeliu, PhD, is a psychologist, psychoanalyst, a member of Espace Analytique (Paris) and President of SEGPA (Spanish Society for the development of Psychoanalysis and Group Psychotherapy), and editor of Clínica y análisis grupal.

Reviews and Endorsements
‘Karl Abraham was one of the earliest psychoanalysts. His contribution is an enormous but neglected achievement. He was responsible for the ideas, but most especially the observations and practice, of the object relations approach, long before the approach was fully conceived. It was his innovative recording of his patients’ internal objects and the fate of those objects under the pressures of projection and introjection that started the movement away from pure “drive theory”.

Abraham died young, in 1925, which is no doubt responsible for the neglect that has placed him, his work, and his originality in the shadows. It was an unfortunate fate that is now being rectified by this book, which restores Abraham to the principal place he has deserved for so long. Isabel Sanfeliu has created a really accessible conceptual biography, detailing the clinical journey of Abraham’s career from his early training at the Burgholzli Hospital with Eugen Bleuler and Carl Jung, to being the pre-eminent psychoanalyst in Germany in the 1920s. He was the destination for many younger people wishing to train with him in the psychoanalysis that was developing after World War One. Not least of those were the generation that included James and Edward Glover, Alix Strachey, and, of course, Melanie Klein. His life is truly that of a psychoanalytic celebrity.’
R. D. Hinshelwood, Professor of Psychoanalysis at the Centre for Psychoanalytic Studies, University of Essex

Review in ACP Bulletin, by Jerram White
Isabel Sanfeliu offers a rich and detailed study of the life and work of one Freud's closest and most creative collaborators. Part biography, her book is an interesting window on the history of the early psychoanalytic community with Freud at its centre, and Abraham and the Berlin Institute he co-founded as important and vibrant nodal points. More than this, however, the book aims to establish Abraham as the true pioneer of object relations theory, and so to the fill in missing links that Sanfeliu suggests may exist between the origins of the theory and its contemporary forms.

Sanfeliu's analysis of Abraham's theoretical and clinical contribution to psychoanalysis traces his ground breaking study of the pregenital phases and their role in ordinary and pathological development. Throughout, her focus remains the changing status of the object in Abraham's work. Sanfeliu shows that while retaining a central place for the economic dimension, Abraham broadened and elaborated the concept of object from its beginnings as a place where the drives are discharged towards a fuller recognition of the effects of disturbed relationships to primary internalised objects on the individual's capacity to live and love. Among the many fruits of this work, she suggests, were Abraham's understanding of the constructive and destructive roles of infantile aggression, and the priority of a unique maternal function around which the infant's mind and symbolic universe is structured. These ideas would prove fundamental to later developments in the work, amongst others, of Klein, Winnicott and Bion.

The first half of the book sketches the socio-cultural, historical and inter-personal context in which Abraham lived and worked. Sanfeliu draws on his extensive correspondence with Freud and others to weave together a picture of Abraham the friend, disciple, colleague, clinician, scientist, soldier, father, son and husband. These historical and biographical details, the picture of the man in context that Sanfeliu suggests has so far been missing from the literature on the history of psychoanalysis, lend the book a lightness and set the scene for the later, denser discussion of Abraham's clinical and theoretical work.

Sanfeliu portrays Abraham as an optimistic, loving and stable man, a skilled organiser, and a pre-eminent supervisor and training analyst whose analysands included Melanie Klein, Helene Deutsch, Edward Glover and Alix Strachey. She shows Abraham in relation to Freud and his contemporaries. Abraham's short life (1877-1925) spanned periods of tension between social and political conflict and upheaval, and widespread creative efflorescence in art and culture. In the midst of similar tensions within the emergent international psychoanalytic community, Abraham is presented as a diplomatic but independently-minded moderator, and a steady and highly-valued member of Freud's inner circle.

The second half of the book is largely focused on several of Abraham's seminal papers showing the development of his work on the division of the libidinal organisation into stages in accordance with the evolution of object-love. Sanfeliu charts Abraham's ideas on the object relational aspects of the child's movement through the oral, anal, phallic and genital phases, and highlights the relationship between developmental disturbances and the resulting symptomatology. Throughout their correspondence Freud seems to have praised Abraham for the clarity of his presentation and the richness of his ideas. Sanfeliu's explanation and discussion of Abraham's work on the internal object relationships underpinning manic-depressive illnesses, obsessive disorders, perversion, hysteria and schizophrenia are similarly rich, clear and concise.

Sanfeliu ends the book with her own contemporary contribution to the study of the object in psychoanalysis. In doing so she draws on philosophy, and on British, French and Spanish schools of psychoanalytic thought. This final section could have been expanded. Nonetheless, Sanfeliu makes both an interesting and very enjoyable case for reinstating Abraham and his work to the position of prominence reflected in the following quote taken from the obituary written for him by Freud: "Among all those who followed me along the dark paths of psychoanalytic research, he won so pre-eminent a place that only one name could be placed alongside his" (Freud, Karl Abraham, 1926). Jerram White